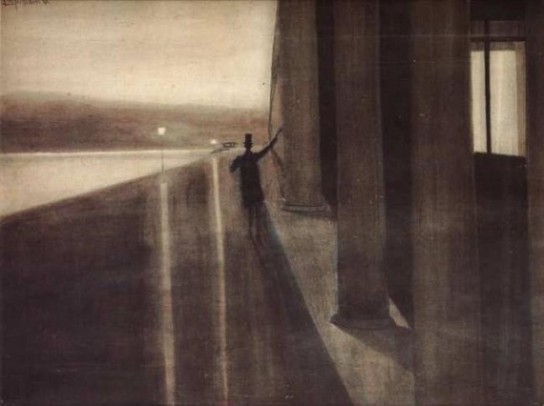 Leon Spilliaert, a largely self-taught artist from Ostend, Belgium, was a life-long Symbolist and an artist fully engaged with his environment. Images of the Ocean, the landscape, and the isolation of his corner of the world are frequent subjects of his work. His art often expresses skepticism towards Industrialization and the idealization of Reason that was influential in his time, and he spent much of his time illustrating mystical and disturbing novels, stories, and music that rebelled against the Bourgeois morality of Fin de Siecle Europe. For example, he was an early champion of Leautremont’s book The Song of Maldoror– a book preoccupied with the most severe evils its author could conjure.

Images of ghostly landscapes that appear both beautiful and haunted figure largely in Spilliaert’s oeuvre. He produced many pictures of beaches in particular that are perhaps outside the purview of the “seascape”- it is the beach that is visible, the sea is often merely implied or presumed to exist by the viewer because it has been called a “beach.” The long stretch of light across empty land from solitary sources of illumination often imply the medium of a damp surface prone to “shininess” such as sand on a beach or concrete or wood planks in the rain (a paved boardwalk by the sea, for example). What is always truly at issue is the feeling of an empty stretch ahead of the viewer, the loneliness of the sources of light, and the sensation of an obscuring force (fog, clouds, sea-mist, darkness).

Night stands out as a successful marriage of many of Spilliaert’s favorite motifs (beach, night, distant lamps, a lone figure, etc.) into one image paired with a structure that is unique to this piece- a row of columns. This inclusion of the arcade may offer a window into the meaning of the symbol of the beach.

In Night, a character with a tall hat and a long coat or jacket is either standing or walking in a manner that appears languid on the edge of a beach, skirting an empty structure fenced with columns. It is significant that the figure is not within the columns- he paces outside of them. He does not trace the measured comfort of the arcade’s confines, removed from confrontation with nature. The column’s origins in Greek and Roman civilization, and the return to wide usage of the column by those who hoped to revive something of the spirit of antique civilization, suggest a grounding in reason, observation, mathematics, and logic that Spilliaert and his fellow Symbolists were in open rebellion against.

Outside of the line of columns that appears to cover a great distance, the walker on the beach chooses to face the staggering infinity of the Sea with the over-hang of fog and an eerie, yellow-grey light. The sparseness of lights highlights the diminutive stature of things in the face of the open expanses before them. The character faces the suggestion that the structures of Reason seem potentially irrelevant against the vastness of space. Mortality and its products are placed in their proper context- small, lonely, and difficult to discern the underlying raison d’etre. The brave soul who elects to step outside the constructs of Reason and become exposed to the humiliation of a profoundly vast expanse before him is the Symbolist and the revolutionary against the Enlightenment himself.

Further, that this figure stretches his arm out in a gesture that might suggest various things- amusement, gaiety, a feeling of being overwhelmed, glorification, or a gesture of dismissal- helps this image of the beach walker transcend the darker side of Nihilism: we can imagine the solitary figure to be happy. We can imagine this figure to be Spilliaert himself, inspired by this vision rather than recoiled from the confrontation with enormity. In this way, Night may be the most hopeful image in Spilliaert’s repertoire. The inherent mortal comedy of such an interpretation might place the image somewhat nearer to artists like James Ensor on the continuum of Belgian art than he usually finds himself. Ensor was constantly laughing at the fallibility and foibles of his fellow man- it is the foundation of his art.

It is possible to approach this image with a light heart and sympathy with its subject (in contrast to some of Spilliaert’s imagery which is sometimes described as “spooky,” “unnerving,” or inspiring vertigo). Perhaps Night‘s lone figure might find a friend in Albert Camus’ Sisyphus when Camus asks us to ascribe joy and contentment to the man faced with an infinity of inherently pointless and repetitive experience (he is condemned to roll a rock up a hill over and over for the rest of time). The viewer of Night is invited to step outside the confines of Reason and look ahead in wonder at the implied infinity, despite the solitude and ephemeral nature of the isolated lights that populate the edge of the Sea.

One thought on “Leon Spilliaert: “Night””